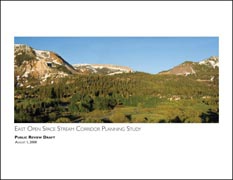 Project Description: "This plan for the East Open Space Stream Corridor is derived from the Town's 2007 General Plan policies that require district planning for Major Land Use Development projects that propose changes to the Zoning Code or General Plan. The Planning Study was initiated in conjunction with The Sherwin project, a land use application that would include amendment of the Zoning Code to allow for clustering of density to build a hotel project up to 77 feet in height. While the project would allow for preservation of the southern part of the site as open space, and respect the open space stream corridor overlay zone, the increased height has raised concerns about scale, compatibility, and private view impacts to neighboring development. The study area for this planning effort encompasses approximately 45 acres, coincident with the eastern part of the Open Space/Stream Corridor (OSSC) zoning overlay area. Although the General Plan does not define this as a separate district, the Planning Commission determined this to be an appropriate boundary for the planning study, since its focus is the Mammoth Creek corridor and its open space, community character, access and natural resource values." – from "Executive Summary: Background"