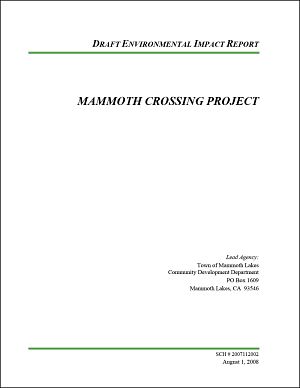 Project Description: "The Project proposes redevelopment of three of the four corners that comprise the Main Street-Lake Mary Road/Minaret Road intersection with a combination of resort accommodations, retail uses, and public plazas. The Project is located within the North Village Specific Plan area, and includes a series of amendments to the North Village Specific Plan ("Specific Plan") as originally adopted in 2000 and amended in 2005, as well as amendments to the Town of Mammoth Lakes' General Plan ("General Plan"), which would be required to accommodate the Project's proposed land uses. The Project site, approximately 11 acres, consists of four locations, three of which would be developed with new uses as mentioned above. These three development sites, which include parcels at the northwest, southwest and southeast corners of the Main Street-Lake Mary Road/Minaret Road intersection, total approximately nine acres. In total, the Project would include the construction of up to 742 condominium/hotel rooms, up to approximately 69,150 square feet of hotel amenities and operations and general retail uses, 40,500 square feet of retail development, and 711 parking spaces and nine spaces for hotel guest check-in. Affordable housing, totaling 45,991 square feet, would be required to be provided as part of the Project, some of which would be constructed off site. Proposed development at the three sites would involve multiple buildings ranging in height from one to approximately seven stories." – from the Introduction 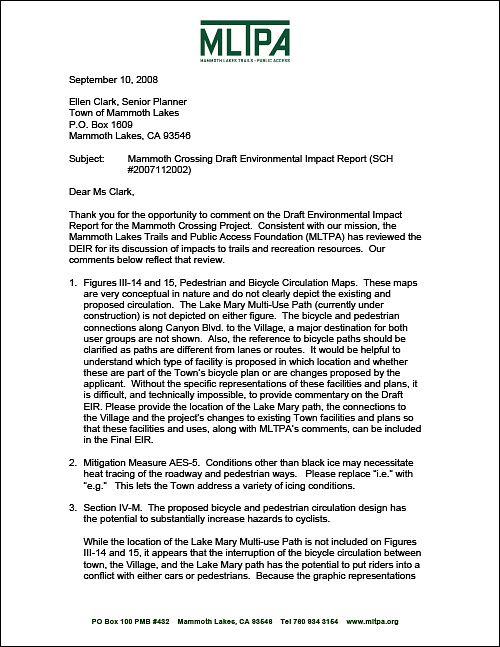 In September of 2008, MLTPA provided written comments to the Town of Mammoth Lakes on the Mammoth Crossing Draft Environmental Impact Report.