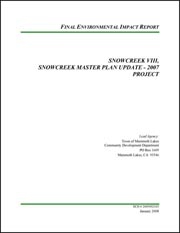 In October of 2007, MLTPA provided written comments to the Town of Mammoth Lakes on the Snowcreek Draft Environmental Impact Report.