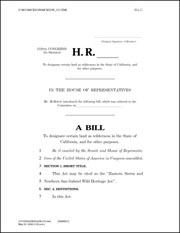 Project Description: "Each year, thousands of people flock to the Eastern Sierra to hike, fish, climb, horseback ride, and enjoy the remarkable beauty of the region's wild lands. Recreation on these public lands is the foundation of the area's economy. Residents of rapidly growing northern Los Angeles County go to nearby open space in the San Gabriel Mountains to spend time in a natural setting close to home. Our elected officials are acting now to preserve pristine, beautiful places in the Eastern Sierra and the San Gabriel Mountains as wilderness, leaving a lasting legacy for future generations to enjoy. This proposal preserves over 470,000 acres of spectacular, unroaded lands as wilderness, adds 52 miles to the national wild and scenic river system and creates a winter recreation area outside Bridgeport in Mono County." – from a fact sheet by Keep the Eastern Sierra Wild

Wild Heritage Act Bill as proposed in the second session of the 110th Congress.

Reference map for the Wild Heritage Act prepared by MLTPA.

Letter from MLTPA to Senator Barbara Boxer and staff regarding the Wild Heritage Act, sent June 17, 2008.

Letter from MLTPA to Senator Diane Feinstein and staff regarding the Wild Heritage Act, sent June 17, 2008.

Letter from MLTPA to Representative Buck McKeon and staff regarding the Wild Heritage Act, sent June 17, 2008.