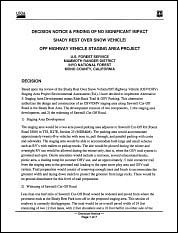 Project Description: On March 26, 2014, culminating a planning process originally initiated in 2011, Mammoth Lakes District Ranger Jon Regelbrugge made the following decision: "Based upon my review of the Shady Rest Over Snow Vehicle/Off Highway Vehicle (OSV/OHV) Staging Area Project Environmental Assessment (EA), I have decided to implement Alternative 3: Staging Area Development minus Ride-Back Trail & OSV Parking. This alternative authorizes the design and construction of an OSV/OHV staging area along Sawmill Cut-Off Road in the Shady Rest Area. The development consists of two components, 1) the staging area development, and 2) the widening of Sawmill Cut-Off Road."

Preliminary Planning Efforts: In January of 2011, the US Forest Service announced that it had received an OHV grant from the State of California to support recreation planning efforts for the Shady Rest area within the Town of Mammoth Lakes. The planning process was designed to address year round motorized use while considering the needs of non-motorized users in the immediate and surrounding area and the potential impact of proposed geothermal development. The desired outcome of the planning process was to design, review, and approve the development of a new motorized staging area. From the Inyo National Forest Press Release: "The planning process will begin with a series of public meetings to discuss current and future recreation uses and review site development options. Information from the public meetings will be used to help develop a proposed action released to the public and subject to the National Environmental Policy Act and the California Environmental Quality Act." The schedule as announced for the public meetings was as follows:

Download and review the District Ranger's final Notice of Decision and Finding of No Significant Impact based upon his analysis of the Final Environmental Assessment - March 26, 2014

Download and review a letter of comment signed by local organizations and individuals in response to the District Ranger's Scoping Letter - March 8, 2013

Download and review a map prepared by MLTPA that overlays the District Ranger's map from his scoping letter with existing multi use paths and trails in the area. February 13, 2013

Download and review a presentation presented by acting District Ranger Mike Schlafmann that provided information on the planning effort and how it coincided with decisions that directed geothermal development activities. February 10, 2011

Download and review a list of "interests" generated by participants at the February 10, 2011 public planning meeting that was gathered to help inform the siting and design process. February 10, 2011

Download and review a presentation that was presented to the public at Public Meeting #2. February 17, 2011

Download and review the meetings notes from Public Meeting #2. February 17, 2011