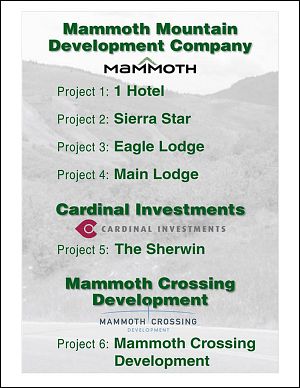 Project Description: To broaden support for the CAMP trails-planning effort, MLTPA teamed up with the Mammoth Lakes Chamber of Commerce to put together the Developers' Forum, whose goal is to "create a source of information and a means of communication between builders, developers, and the Mammoth Lakes community relevant to trails and public-access issues in Mammoth Lakes and the surrounding region." Through the Developers' Forum, Cardinal Investments and Mammoth Crossing Development each contributed $25,000 toward CAMP -- critical funding that supplemented the $100,000 matching commitments made by the Town of Mammoth Lakes and Mammoth Mountain Ski Area. The Developers' Forum also sponsored Randy Martin, a trails enthusiast and real estate developer, to make a presentation to the community on the economic benefits of trails. Mr. Martin made numerous presentations in town to a wide variety of stakeholders.

DELIVERABLES: We've converted three important PowerPoint presentations to PDFs so that you can review and gain some appreciation for the economic value that trail systems bring to real estate development and to recreation-oriented communities:

The first is the presentation Randy Martin and MLTPA developed for the Mammoth Lakes community.

The other two were developed by trail advocates in Park City, Utah, home of the famous Mountain Trails Foundation: "Incorporating Trails Into Developments" and "The Benefits of Trails in Developments."

PHOTOS: Check out photos of Randy Martin on site and in action here in Mammoth Lakes, presenting to Town staff, Noon Rotary, the Realtors' Forum, and the Resort Economic Panel.

PRESS: Check out local reporting on Randy Martin and the Developers' Forum, including a cover shot of Randy Martin as he participated in the Resort Economic Panel in May 2007. We've also included some press releases that MLTPA put out at the time:

REPORTS: Check out the Developers' Forum Strategic Plan, an article written by Randy Martin for the National Trails Training Partnership, and two important links to Web resources discussing the economic benefits of trails: